Is fear of failure preventing you from pursuing a tech career? This article can help you overcome this obstacle to success.

Everyone fails. In fact, most likely many of the people you admire and seek to emulate consider themselves successful failures – especially in the technology industry. Bill Gates, regarded by many as one of history’s greatest technologists, once said: “"Success is a lousy teacher. It seduces smart people into thinking they can't lose." 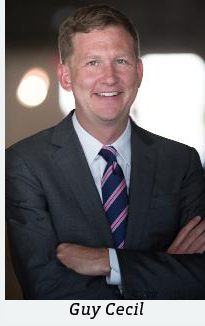 conference, Guy Cecil, once a national TSA president and currently serving as the Chair, Priorities USA, gave a keynote speech on “Failing and Serving our Way to the Top.”

Recounting on several successful characters ranging from politicians to activists such as Martin Luther King, Cecil highlighted their successes and failures – the latter being a subject often overlooked by business media.

“I have personally failed several times,” Cecil told TSA students gathered for his keynote. Coming before his current successes, he said, were many years of trying and failing to reach his goals.

Cecil’s message resonates with comments by Creating IT Futures CEO and award-winning author Charles Eaton. During an episode of his Technologist Talk podcast, Eaton says that “true technologists not only admit failure, they embrace it.”

Eaton also attended the 2019 TSA conference, bestowing 10 CompTIA Scholarships for Future Technologists to college-bound students planning to pursue careers working with technology. To be eligible for one of these Future Technologists scholarships, applicants must have attended and competed at a state or national TSA conference within the last year. This means that even students who competed and did not win (what some misguidedly might consider failing) are eligible to apply.

These scholarship awards serve as evidence that you never should allow fear of failure to limit your career ambitions. Embrace failure, as Eaton advises. Tell your peers and mentors about your failures, as Cecil urges. And perhaps, someday you will develop into a resilient tech leader like Gates.

To be a true technologist, you must embrace failure; it’s the part of your success story that most often goes untold.

Joshua Eyaru, who is from Uganda, is a fellow with Atlas Corps assigned to Creating IT Futures. He holds a master’s degree in business administration from Kampala International University and is interested in non-governmental organizations management. (His undergraduate degree is in Information Technology.)

In 2014, Eyaru co-founded Youth for Reconciliation and Leadership, a community-based organization promoting peace and digital literacy in rural Serere, Uganda. He also works part-time as a digital skills trainer and has helped more than 5,000 young people acquire skills as part of the Google Digital Skills for Africa project.