Before her internship, Jontavia Strickland often would dream up catchy melodies, sing along as they played and record the tune on her phone. Now, after spending the summer working at YEP Nation, Strickland has learned the full breadth of sound design and production, including recording, editing and mixing a song — and she hopes to make a career in digital music production.

“I’ve written a bunch of songs, but I’ve never actually made a song like that,” Strickland 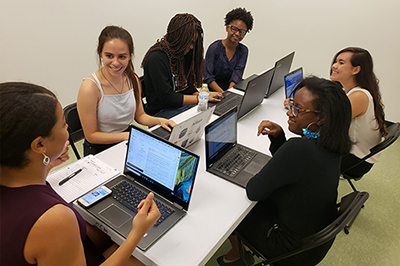 said. “That was a full song where I engineered the beat, wrote the lyrics and put it together and helped record it. That was a lot of fun to do.”

Strickland and her best friend Kendell Rasco, both students at Chicago’s Little Black Pearl Academy, expected to spend their summer technology internship stuck behind computer screens. Instead, they had four weeks of access to a tricked-out studio and a chance to play around with expensive audio/visual gear. They also learned about augmented reality presentations, how to make dynamic online learning materials and gained hands-on experience developing marketing and sales lists for a client. In short, they learned that artists can be technologists, too.

“Everything they’re doing can transition over to corporate work,” said Edward Prentice, president of YEP Nation, a creative media company that’s often hired to develop creative projects for high end corporate clients. “Everything they learned can be applied to a current occupation.”

Strickland’s and Rasco’s paid internship was provided by a partnership between Creating IT Futures, Best Buy and YEP Nation and designed to get young women into creative technology roles. Through the internship, these young women were trained to go out on corporate gigs and develop high-profile media campaigns. “A lot of our youth aren’t being directed to the creative art space, and that’s why we’ve taken this track,” Prentice said.

After the track was cut, Rasco used her visual arts talents to make a music video to go with it. “I’m pretty happy with what I did,” Rasco said. “The music video was definitely something I was proud of. It came together so nice.”

Strickland and Rasco did more than create a hit song. Thanks to the Creating IT Futures partnership, the interns: 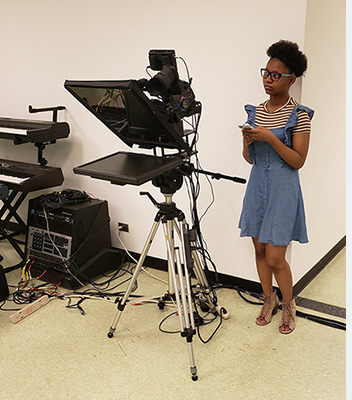 “A lot of times with  internships you don’t really  get to do anything you like to do,” said Prentice. “I’ve been around a long time and I didn’t want our internships to be that way, so when they come in they’re immediately doing fun stuff.”

For Rasco, the internship helped her see how to transition from paintbrushes to digital illustrations and professional animation. “It’s something I’m hoping I can take into the real world,” she said. “Art is my passion. I try to work on it every day.”

‘Something They Can Put on a Resume’

The internship included hands-on projects, an introduction to IT fundamentals and a chance to make a real contribution to the organization while showcasing their skills, said Prentice. “They’re getting certification, there’s performance. There is a deliverable, it’s not just soft skills,” Prentice said. “The whole point is to give them something they can put on a resume.”

Creating IT Futures worked with YEP Nation and Little Black Pearl on the internship program because of the overlap in missions.

“I like working with Creating IT Futures because they send over people I can train,” Prentice said. “Our mission is to find young women we can train to be able to do something once they leave here. Most companies, their mission is to fill widgets. If your mission is to make widgets, you might not be interested in having someone stop and take time for an intern, but at our company, we’re looking for that.”

Little Black Pearl also is home to a Best Buy Teen Tech Center, an interactive learning space to help teens explore technology to discover new interests, collaborate with one another and prepare for the future. As Rasco and Strickland start their junior year, they’re making plans for life after graduation. Strickland is “already way ahead” on her plans for college and where she wants to live. “Part of me has already planned that and the other part of me wants to focus every day to make sure I want to get to where I want to be.”

What she didn’t know before the internship is that she could use her creative skills in a technology job. “Even if you don’t have a job or degree in electronics stuff, there are still situations where I can use my talents,” Strickland said. “I was grateful to learn that.”

Get Your Company Involved

Aside from the hands-on work, Prentice used the internship to show Rasco and Strickland examples of other projects. “We talked about what corporations are looking for, and showed them some examples for Shure Inc. and BP,” he said. “This is what they’d be working toward, working with the project manager or the creative director.”

Most large corporations use e-learning, and their level of expectancy isn’t Hollywood level. “Everything you see is graphics, anything that’s screen based is graphics. Somebody’s got to create training for it,” Prentice said. “Whether it’s workshops or media or online training, everything needs something developed for it.”

Paid interns through Creating IT Futures can help you develop meaningful projects while you give them a chance to try working in technology. Through grants and partnerships, you can:

The interns get a chance to try out work in the real world and find ways to use their creative skills with technology to develop a career. “We have a model. We can train them enough to produce a solid deliverable, and then they can decide to go to school or take an online course,” Prentice said. “The partnership with CompTIA went well beyond my expectations.”

For information on getting involved with the students  year-round or offering internships for summer 2020 through Creating IT Futures, contact Dezyre Stewart.

—Michelle Lange is a writer and designer living in Chicago.