Dezyre Stewart didn’t get much notice that the after-school program she runs for teens was moving online because of the country’s pandemic.

“The whole thing came out of nowhere,” she said. “One minute I am in the classroom with the students; the next, I get an email saying no one can return to school. So I had to figure out ways to still connect with those students.”

The after-school program is operated by Creating IT Futures, a tech workforce charity founded by CompTIA. One of its goals is to encourage more young women and teens of color to get on a tech career pathway.

Teens attending the after-school program Stewart manages already are well connected; she knew that they had access to smart phones, laptops or PCs. So, from an operational point of view, transitioning to online was fairly seamless.

But Stewart prides herself on emotionally connecting with the teens, not just helping them access online resources. She listens as they share triumphs and tribulations and offers insight into challenges they are experiencing.

And that — figurative high-touch connection — doesn't transition especially well to an online format.

“Our first meeting consisted of letting them express themselves, because kids don’t often have a chance to be heard,” she said. “I wanted them to know that their feelings matter, their opinions matter.”

Teens report that they are struggling, she said. They’re trying to organize their day and schedule time without adult supervision, as their parents work. And that’s hard.

“Teens don’t like being lectured at all the time, or talked to all the time in a way where they can’t even get a word in edgewise,” she said.

Stewart sees her role as helping teens connect the dots between ways they interact with digital tools now, and how that is building a strong foundation for a potential tech career.

“Teens can be playing a game on their smart phone and you can ask them, ‘Hey, look up 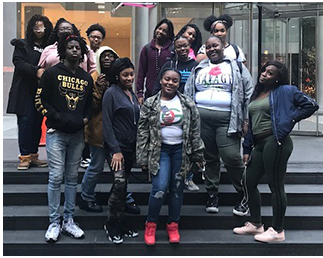 this restaurant,’ and they can do both at the same time, no problem,” she said. “But if you’re on Zoom and ask them to Google, it becomes different. It’s like if you place the label, ‘school,’ over something they’re doing, everything they know flies out the door.”

In some respects, Stewart says, the program is teaching teens some life-long skills, rather than simply tech skills.

“They’ve been telling me how hard it is to wake up on time,” she said. “This isn’t summer vacation; you can’t sleep until noon. At first they took full advantage of being home alone, and I had to help them rewind that.”

And Stewart’s group of teens has discussed the stress everyone is feeling because of the pandemic — it’s not just teens.

“This has been an adjustment for everybody,” she said. “With our program, it’s about experimenting — what works and what doesn’t. I’d encourage everyone to just take some time to really listen and support their teens, because they need us. They’re just trying to figure everything out.”

The Best Buy Teen Tech Center at Little Black Pearl is a member of the Clubhouse Network, a global community comprised of 100 Clubhouses in 19 countries, providing 25,000 youth per year with access to resources, skills, and experiences to help them succeed in their careers, contribute to their communities, and lead outstanding lives.